Christmas is just a few days away so if you are looking for an eye-catching, no-bake dessert to take to your next Christmas party or for Christmas Eve, try our Christmas Brownie Bites. We have Rudolph bites, Santa's Hat bites and Peppermint Candy Cane bites! You can try just one or all three using the ready-made brownie bites found in the Smith's bakery. (Of course, it is cheaper to make your own brownie bites using a brownie mix and mini muffin pan, if you have time.) To make the Rudolph Brownie Bites, I used a canned chocolate frosting to frost the top of the brownie. In a separate bowl, I mixed a small amount of chocolate and vanilla frosting to get a light brown for the “snout”. I used a frosting bag to pipe a dollop of light brown frosting in the middle of the bottom half. Then just press a red M&M into it for the nose. For the eyes, I used Wilton candy eyes, which are also available at Smith's. The antlers are just a broken pretzel pressed into the side of the brownie bite.

Stir 1 tsp. of mint or peppermint extract into canned vanilla frosting. (If you are also making the Rudolph Bites, you can use the remainder of the vanilla frosting that you opened to make the light brown.) Frost the brownies with a spatula or a frosting bag and tip. Put 1 candy cane into a plastic zip-top bag and crush it using a rolling pin. Sprinkle the crushed candy cane onto the peppermint frosting. These cute Santa Hat Brownie Bites are so simple but so yummy! I used a dollop of canned cream cheese frosting on the top of the brownie and pressed an upside down, cut strawberry into it. With a frosting bag and small star tip, I added a small bit of frosting to the top of the strawberry to represent the pom pom on the top of Santa's hat. (I wouldn't recommend making these more than an hour or two before your party as the cut strawberry can get juicy and slide off the frosting.)

Hope you and yours have a Very Merry Christmas from everyone at Coupons4Utah! 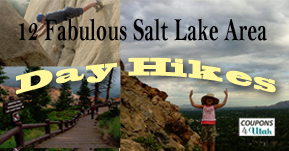